I have yet again, not been on here in ages other than to read posts by Neil Gaiman and George R R Martin and Julie McGalliard...

So, hello internet. I know no-one is listening.

It's my birthday today. For the first time in ages, it is not over the Easter bank holidays/half term so I am home alone with my pets as (almost) everyone I know is at work.

I may ride my mountain bike and my motorbike today, I may meet some work colleagues for lunch (which feels a bit sad considering I took the day off today). I may do all sorts of wonderful things, but for now I am sitting at my computer like Neo in The Matrix, my face lit up by the glow of the screen as I have the curtain drawn up against the world outside.

This is how I used to live a lot of my life. Of late, I have moved away from the internet. Oh, I check my emails and go on Youtube and post videos occasionally. But I do not trawl through the weirdness the way I used to. I have less patience for the rubbish that is out here. But, fuck it, as I said before, no-one is listening.

Almost a year later to the day, me and my friend Michael went to another gig in London. This time it was Mad Caddies at The Academy in Islington.

Mad Caddies have not released a new record since 2007 and so when 'Dirty Rice' came out this year, I had to have it. Then they announced a European Tour. Me, I just have to see the devil in the flesh.

I fucking love live gigs, especially when they are this good. We had a great evening, singing and dancing and drinking.

I did note later on that everyone there seemed to be younger than us which led me to wonder if these are new fans brought on by a new album release or if they actually like the 1990s ska-reggae band that I've loved for years. We also noticed that this rather male-heavy crowd did contain some women but they all seemed to be there with their boyfriends - were they dragged along? Or do girls like this music too?

I recalled the old days and there was always a mixture of both at gigs - the girlfriends dragged along reluctantly and the genuine fans. Aaah, the old days when girls turned up in all skater clothing and skanked along with the rest of us in the rather tame mosh pit that you get with chilled out music. Michael and I reflected later on that we must have looked like an old gay couple, singing and dancing and cheering for our favourite tracks...

Michael turned 30 on 3rd December, the first of my little group of old school friends to reach this milestone.

We got very drunk on a Tuesday night and sang "All American Badass" together along with one of our favourite bands. When I turn 30, very soon now, I think this seems a good way to do it.

"We all get knocked down, and kicked in the teeth, sometimes we land 'splat', sometimes on our feet. We struggle to survive, better days might come, well fuck it if they don't, we still carry on."

I went to see King Prawn last night at Koko in Camden with an old friend I haven't seen for ages. It was a great gig and reminded me why I love seeing live music.

Also made me think of you Lurch, 'cause you would normally have been with me for one of these.

Miss you mate. Hope all is going well with you and Izzy out in that wild countryside.

My friend of many years and best man at my wedding is leaving the country for good this month. He is going to live in New Zealand and won't be coming back.

I first became friends with him in a online setting. We were both members of one of those free little home made websites with a message board and we used to send quotes from films, TV and songs to each other.

When met a lot more in person after the initial online friendship and found our tastes led us into the same friendship group, bars, films and gigs. We recently saw 'The World's End' together which was a poignant film to see when you know it's the last one you'll share. If you didn't catch it, get the DVD/Blueray of this wonderful conclusion to the 'Cornetto Trilogy' - Simon Pegg gives the performance of his life as a man who cannot let go of his teenage persona (A 90s Goth - it's like he can see my own past!).

Anyway, I digress. As I often do when in conversation with a good friend. As one of our favourite local bands would sing, there were many "Self indulgent ramblings, no-one ever seems to listen". We could talk for hours on comic books, Terry Pratchett Discworld novels, Tarantino movies, Batman video games and much much more.

My friend Lurch is leaving and it will take me a day in a plane and a journey across Lord of the Rings country to ever see him in person again. As they said in American Pie (1999) "God bless the internet". without this tool for research and communication, we would never get to send random out of context quotes to one another.

Last night, possibly for the last time ever, Lurch and I sent quote after quote to each other for no reason by text message - our old favourite game.

Here are the texts as they were sent...

L - "When you think about it even medium-hard, Ghostbusters is pretty much just the best film there is."

F - "I wouldn't be able to quote it so easily if it weren't so damn good." 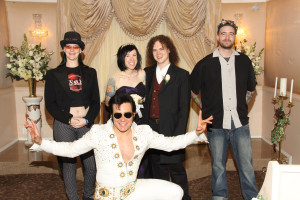 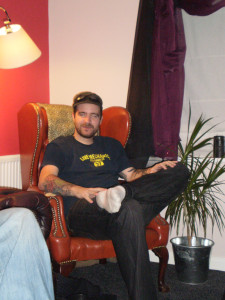 A list of texts from my wife that are still on my phone...


"Dr Watson is so gay for Holmes. I never noticed before."

This was probably the Jeremy Brett incarnation - and he is pretty hot in a nerdy kinda way.


"I want to stay at the Radisson blu hotel in Berlin! XxxX"


"Just having my dinner in Amelie's cafe! X x x"

My wife travelled to Paris on her own for a few days because she does awesome things with her spare time. If you haven't seen it, watch the film 'Amelie'. We have also been to Paris together on two separate occasions, the last of which I managed to convince her to go to the to of the Tour Eiffel.


"Well I'm now very very poor, the man who served me is obsessed with War Hammer! Geeks are taking over!"

She found a table top gamer in the Louis Vuitton store...

My wife got her septum pierced last summer.


"I just screamed at the stupid cow in the post office who short changed me. ...I had bright pink lipstick all over my teeth. ALL OVER."

Sometimes you have a bad moment and you have to share it with people who'll understand.


"A tourist stopped me and asked to take my picture."

My personal favourite - my wife attracts that sort of attention wherever we go! 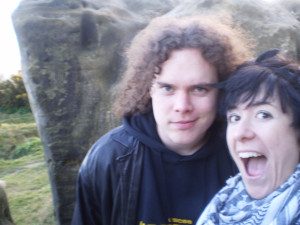 Yeah so I've not been on her much lately except to read entries. I will do a proper update of sorts when I find time.

So in recent news, I've been happily working away at my new corporate job, earning the same money but enjoying the regular hours and pay that a real company can give.

I recently went to the Sci-Fi Weekender with my wife who won our tickets in a big give away. Go visit my Youtube to see how awesome that was - http://www.youtube.com/user/NickyD1978/featured

Will post a new list of odd texts or random thoughts just as soon as I get time to type them up.

Hell yeah, I did my last day at the crappy little holiday company today. I'm going back to corporate life on Tuesday with the Big Insurance Company. so tonight - we drink! 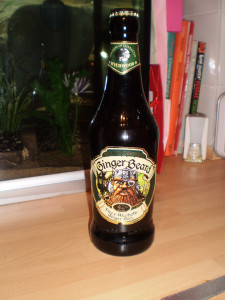 Also, in other news, I'm a massive Hellboy fan (comics and films)and a recent news story really got me. Ron Perlman who plays Hellboy got back into that makeup because a young boy called Zachary who has leukemia asked the Make A Wish foundation to spend a day with Hellboy. I love Perlman for doing this, what a nice guy. 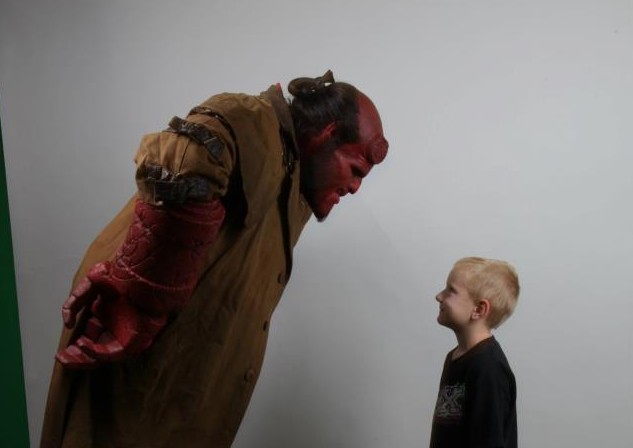 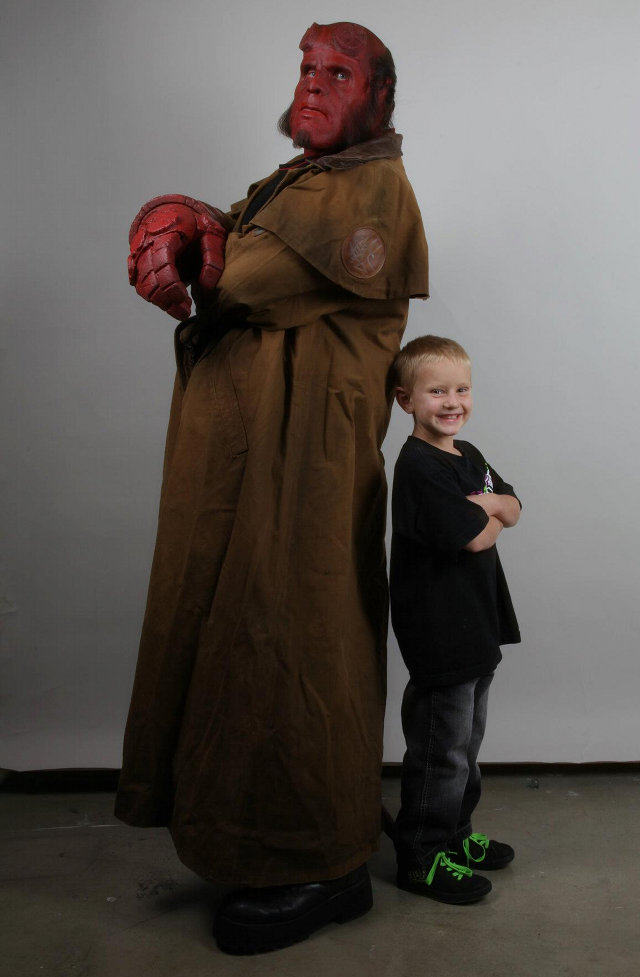 I Quit My Crappy Job!

On August 14th I will be an employee of a Big Health Insurance Company. I'll be handling claims calls and related paperwork. Glamorous I know.

To be honest, I mostly went for this new corporate job because I want regular hours - I want my damned lunch breaks back! I want to not be shouted at for every tiny imagined imperfection in my work. I want to get paid on time and be taxed the correct amount. There's a reason I do the corporate goth look so well - it works. Big companies pay properly, maintain good standards and shock horror - they offer promotions and raises and progression.

This does not change my desire to make a gruesome cult horror film with tons of blood. Nor will it stop me going to gigs, drinking too much or wasting my life with books, films and video games. In fact, I'm hoping it's going to allow me to get back to myself again.

I like that every day has some sort of made up holiday. By the way, Happy Birthday to Gemma who now shares her day of birth with World Goth Day...


"Woke up this morning at the end of another bottle,
I don't know what's really going on,
Been here so many times you get used to the pain,
Why do I continue to play these self destructive games,
Once again I will say

Today will be the day, Today I'm gonna change..."

To be read with a 1980s era computer generated voice:

Someone diagnosed with bipolar disorder (formerly known as manic depression) experiences swings in mood from periods of overactive, excited behaviour known as mania to deep depression. Between these severe highs and lows can be stable times. Some people also see or hear things that others around them don't (known as having visual or auditory hallucinations) or have strange, unshared, beliefs (known as delusions).Everybody experiences mood shifts in daily life, but with bipolar disorder these changes are extreme.
Collapse